Perhaps not as slick a presentation as we are now used, but Carleton
Community High School hosted a wonderful evening with Apollo 12
moonwalker Alan Bean. An excellent slide presentation sprinkled with
jokes and anecdotes to a packed house.

The signing that followed also lacked some of the polish to which we
have become accustomed. Our guests can now sign autographs for 475
people in little over an hour but for Alan’s first visit it took more
than twice as long. But he insisted on signing for everybody with a
generosity of spirit and goodwill that characterised the whole
evening. Thank you Mr Bean!

“After the success of the Charlie Duke I received lots of e-mails
asking if I would do another event because we needed something like
this in the North. I asked Charlie if he had Alan Bean’s e-mail
address and contacted him. Alan said he was busy with his painting’s
but would work something out. In the early days we didn’t have a
dinner, only the lecture and this was going to be on a Friday night. I
was contacted by Autographica who asked if I could change the date of
the lecture to Thursday and ask Alan if he would go to them on Friday
for their weekend event, Alan agreed so the lecture was moved to
Thursday. It was a sell out with over 550 people attending and we sent
Alan down to London the following morning.” 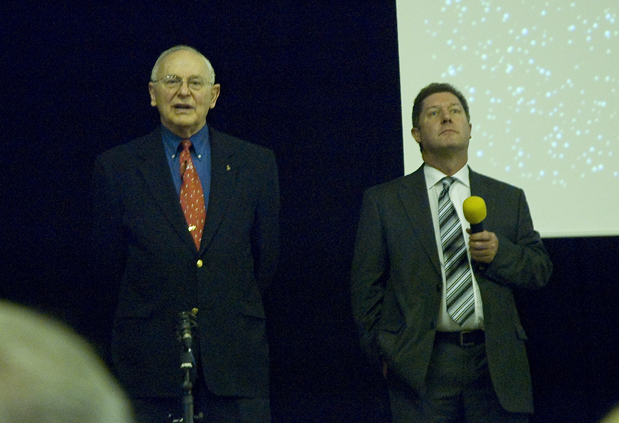